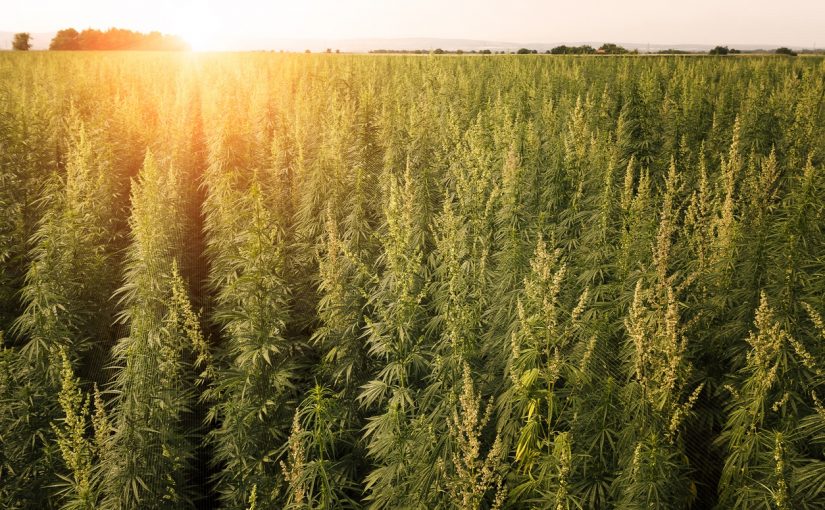 While the legalization of adult use of marijuana is currently off the table in New Jersey, New Jersey and other states will have to contemplate taxation in anticipation of future legalization. Determining a "right" sales tax that balances revenue receipts as it serves to eliminate a black market is not an easy task.  The following article sheds light on various marijuana taxation methodologies. (For purposes of this article, local taxes are not being considered.)

There are two primary ways states tax the sale of adult use marijuana products: as a percentage of the selling price, similar to sales tax, or by weight. Taxing based on sales is easier to calculate. However, prices will likely decline once the market matures (see FIGURE 1), so tax revenue will decrease as well. As well, vertically integrated businesses could manipulate markups to reduce the tax burden.

The Colorado Department of Revenue’s Marijuana Enforcement Division reported pounds of flower and bud sold in 2018 as of the date of the writing of this article. They had not reported revenue.  The Average Market Rate per pound of has been reported and, as shown in FIGURE  1, decreased significantly in 2018, then started to rebound in 2019. Weight-based taxes are more complicated in that it requires determining the amount of the tax and when the tax is assessed.  For example, a weight-based tax could be assessed at the cultivator, processing or retail level.  At the retail level, taxes would need to be set at different rates for different types of products: flower, concentrates, edibles. When taxing edibles, how would the non-cannabis ingredients be accounted for?  When taxing tinctures, would the potency and quantity be considered? There are significantly more factors to consider when ‘weighing’ the options of a weight-based tax.

History indicates that prices tend to be higher immediately following legalization; lower tax rates can encourage the legal purchase of cannabis.  When prices decline, tax rates could be increased, keeping out-of-pocket costs to consumers the same or almost the same.  If taxes are too high, whether weight-based or assessed as a percent of sales, many customers will continue to purchase through the black market.  States must also consider that when the United States de-schedules or legalizes marijuana, it is highly likely a federal excise tax will be placed on sales of the product.  This will replace the burden of Internal Revenue Code Section 280E currently burdening business taxpayers.

What is the effect in dollars of taxing based on a percent of sales versus weight? To illustrate, we analyzed Colorado’s reported sales and the wholesale weight of flowers/buds sold from January 1, 2014, to December 31, 2018.  As Colorado has not yet reported weight data for 2018 yet, we used the 2017 monthly data adjusted for the year-over-year sales increase.

These computations are for illustrative purposes only and are subject to the following assumptions:

FIGURE 2 reflects a computation of tax revenue (medical and adult use) for the first four years of legal adult use in a state with a population of 8.908 million (specifically New Jersey). Based on this analysis, total sales tax collected for the five years was $52.8 million greater using a weight-based tax structure of $42 per ounce compared to the 12% percent of sales tax.  Obviously, the 25% tax rate would generate more revenue – but it would likely be a less effective means of eliminating the black market.

Examples of Sales Tax on Marijuana

As FIGURE 3 shows, the process of taxing marijuana can range from simple to complex and the amounts of tax collected can vary significantly.   Nine states (and Washington DC) do not impose their general sales tax on medical marijuana while four states (Alaska, Delaware, Minnesota, and New Hampshire) do not levy sales taxes.

FIGURE 4 illustrates a sample transaction ($250 per ounce based on no markup of product and all taxes being passed through to the consumer) in both medical and adult use markets and the different amounts that would be charged to the ultimate consumer and the taxes collected.  On the medical side, the purchase of an ounce of marijuana results in a purchase price ranging from $250 to $342.50, depending on the state.  For adult use, the price paid would range from $282.50 to $360.75. 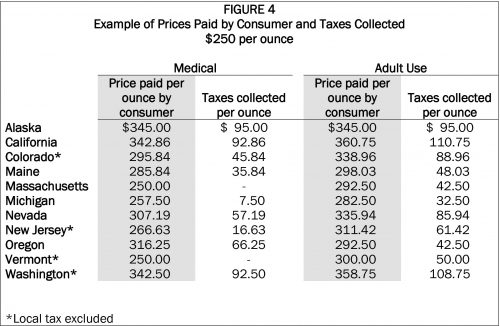 Under the weight-based tax structure ($42 per oz), the consumer’s cost for medical marijuana would be $266.63 (the fourth lowest, with two states levying no taxes).  For adult use, the $42 per ounce tax would result in being at the halfway point compared to other states.  It is very important to realize that the price will not be the same in all states and that this example is presented for comparison purposes only.

About the Author(s)
Stacey Udell is the Director of Valuation and Litigation Services working out of HBK Cherry Hill, NJ offices. She is a leader in the firm’s cannabis industry group and provides a wide range of services to clients in the cannabis industry. She specializes in valuation, forensic accounting, economic damages, and litigation support services. Her experience includes valuations of businesses and professional practices for purposes of estate and gift tax planning and compliance, divorce, business succession planning, and mergers and acquisitions. Additionally, she has prepared damage study reports in connection with stockholder, insurance claims, and lost profits litigation, as well as reports in connection with bankruptcy proceedings utilized by the courts and trustees. Stacey earned a Bachelor of Science in Accounting degree from the University of Delaware. She is a Certified Public Accountant (CPA) in the state of New Jersey, is Accredited in Business Valuation (ABV) and Certified in Financial Forensics (CFF), and is a Certified Valuations Analyst (CVA).
Hill, Barth & King LLC has prepared this material for informational purposes only. Any tax advice contained in this communication (including any attachments) is not intended or written to be used, and cannot be used, for the purpose of (i) avoiding penalties under the Internal Revenue Code or under any state or local tax law or (ii) promoting, marketing or recommending to another party any transaction or matter addressed herein. Please do not hesitate to contact us if you have any questions regarding the matter.